Over the weekend I got myself characteristically worked up about Perú’s impending run-off election between “Cancer and AIDS” to quote Mario Vargas Llosa. To prevent myself from launching into a blogged out-freak about the sense of confusion and disbelief inherent in knowing that the next president of Perú will either be a Fujimori or a Humala (…seriously), I will devote this entry to a much more amusing subject: Latin American politicians and leaders wearing Indigenous costumes. Sincere? Overtly Political? Both? 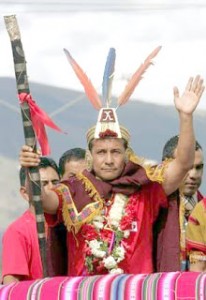 First we have the previously mentioned Ollanta Humala living his father’s Movimiento Etnocacerista dream, dressed up as the Inka or perhaps as Ollantay/Ullanta, the semi-fictional Inka general after whom he is named. Like any good Andean power-seeker or power-holder, Ollanta as Ullanta holds a staff. Luckily red, the color of most mallku ponchos and general Indigenous important-ness in the Andes, is Humala’s trademark color. Is that a coca leaf on the staff? Maybe!

Any hint to irony appears to be masked by Humalas perhaps sincere belief in his own inherited legitimacy. This is nearing the Tupac Amaru II school of Peruvian politics. Why shouldn’t Ollanta dress as the Inka, he IS the Inka…right? 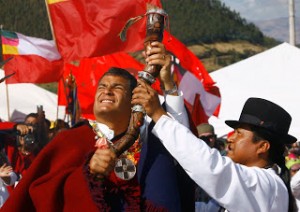 Next we have Ecuador’s Rafael Correa, now serving his second term as president. After graduating from college Correa spent a year working at a rural kindergarten where he seems to have picked up some Quechua. A big deal was made out of this during his first campaign (yours truly thought that the fact that “knowing some Quechua” was newsworthy was a sad commentary on the historic place of Indigenousness in Ecuadorian high-level politics) and here we see Correa in a mallku poncho receiving a staff-like pututu from an Otavalleño dude. Don’t let go! 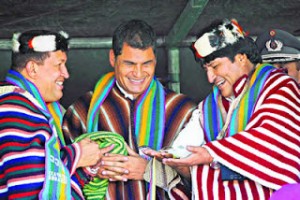 Moving on, we see Rafael Correa enjoying some poncho time with Hugo Chávez and Evo Morales. Morales appears to have acquired a dove. What is notable about these costumes is that Chávez and Morales have eschewed the usual highland-style costumes favored by most South American leaders for Amazonian feathered headdresses. I’m not even going to pretend to know which group those come from but they are not unlike those of the Shuar, whose leader has been questionably arrested as of late. If I remember correctly, Correa had a staff in hand at some point during this particular ceremony. Staff is a must! 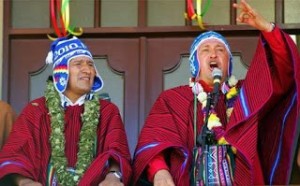 Back to highland styles, here we have Morales and Chávez again, this time in Bolivia. On the left both men are wearing Mallku ponchos (unkus), fair for President Morales who remains Apu Mallku, and matching ear flap hats. Morales sports a formidable coca-leaf lei and his hat is decorated with a wiphala.  They have matching pouches! 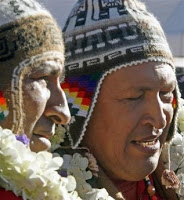 We all know that President Chávez is no stranger to Bolivian Indigenous garb.  On the right we see Morales and Chávez, this time at Tiwanaku, enjoying a different set of earflap hats. Note Chávez’ hat includes a repeating gateway of the sun pattern and a controversial spelling of the site ending in “-nacu”. You can’t see it but he is wearing the same scarf as your author is as she types!

Finally we have Evo Morales at his second Apu Mallku ceremony at Tiwanaku (see featured image). His outfit from the first Apu Mallku ceremony was declared by Bolivian law to be the Cultural Patrimony of the Nation, so it stands to reason that he would need a slightly different outfit for the Jan. 2010 event. Morales, here, had graduated to the full two staff display of power, and walks through the Kalasasaya’s eastern gateway, mimicking the Gateway of the Sun which is poorly positioned for a photo-op.

I honestly wonder how politically successful these displays are. I find myself sorting Evo Morales into a slightly different category than the other fellas: his Ingenuousness is a component of his political discourse. He trades on ancient legitimacy which, I would imagine, these ceremonies reinforce and he isn’t dressed up as a particular ancient hero which just strikes me as weird (cough couch Humala cough). The others, however, just come off a bit dodgy. How does one avoid accusation of, at worst, cultural appropriation or at best, pandering? Can a costume really just be a costume in such tense political climates?