The Poe I didn’t know

This week I read The House of the Seven Gables for the first time and have been googling daguerrotypes like mad. As the first truly popular form of photography, these dark, stiff, and oddly emotive pieces can easily suck hours out of your day. It is a dangerous road to go down folks, I really should be doing something else. 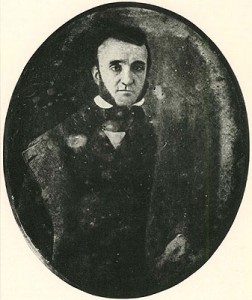 Poking around in daguerrotype land I came across the image to the right. You probably have never seen this image before but you know this man well. Heck, you probably think you know exactly what he looks like.

Taken around 1842, and believe it or not, this is a 33 year old Edgar Allen Poe. Although he was already a pretty heavy drinker at that point and his much-lauded wife Virginia wasn’t dead. This Poe was a bit of an eff-up but was not haunted by any lost Lenores (the Raven wasn’t until 1845, neither was his moustache for that matter).

Indeed, you know Edgar Allen Poe circa 1848 (left): a broken and increasingly erratic man who is half a step and just one night in the gutter away from rock bottom. This is the Poe who is laying down by the side of sepulcher of his bride and all that. We only visually know a Poe when he couldn’t have been worse. 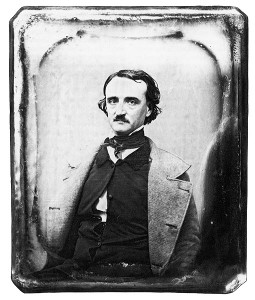 I am trying to think through the effect that photography has on our perceptions of public figures of the past. The limited number of images of some of these people have forever forced us to see them in the light of the one moment that the photograph was taken, no matter how bad or how non-representative that the photograph may be. Of all historic authors, I’d imagine that all of us thought we would recognize Edgar Allen Poe walking down the street. I am just not sure that is the case. The moment of Poe’s life that we visually know now seems a bit unfair.

The question must be raised, of course, if that first photo is actually Poe. Turns out he is wearing the same great coat as in a daguerrotype taken in1848 (right). Of course this is a 1848 image so Poe looks like the suitable mess that we have come to expect from him.

Interestingly enough, Sarah Helen Whitman, who had just become engaged to Poe thus they had a betrothal photo done, stated that “this picture of mine has been hidden away all these years because I thought it did not represent him truly”. This photo was taken within a fortnight of the other ’48 one above after a good few days of emotional outbursts, drinking, and issues. 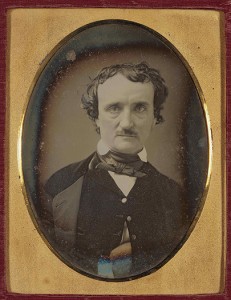 Moving on, the image to the left was taken about 3ish months before he died. It was given to a woman named Annie Richmond who seems to have had some sort of close relationship with Poe at the time. Her absolutely scathing comments about the image: “[It] does not do him justice — indeed, I have never seen a picture that did — his face was thin . . . [here] he looks very stout, & his features heavy, which makes it seem almost like a caricature — yet, he certainly sat for it, & the artist (if he deserves the title) is still living here, who had the privilege of taking it.”

I find it interesting that the women close to him universally believe that every portrait of him taken during his downward spiral looked nothing like the man that they were involved with. Yet I find that my entire perception of Poe as a writer and as a man is wrapped up in these images of a disheveled, chunky faced man with bags under his eyes and an otherworldly expression on his face.  Would my experience of Poe change if the only image I had of him was the ’42 portrait where he is looking together.

To challenge the idea of a photograph as and  ‘authentic’ artifact of the past is clearly a bit too complex for a slow Tuesday early afternoon. Maybe that is a task for another day, but I just wonder who certain people would be in my mind if I had never seen them.