The Cerebroteca: Brains in jars for learning? For fun? 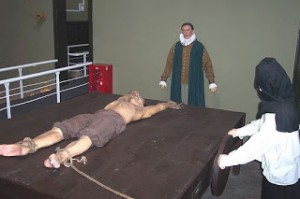 I’ve been to Lima four times, but only twice did I leave the airport and only once was I there for more than 12 hours. Under those circumstances it shouldn’t be a surprise that I have only visited two of Lima’s many museums.

The first that I visited was the Museo de la Inquisición y del Congreso . On a bus somewhere in the deserty bit of expanse below the Andes after 3 months in Bolivia and while consulting my Lonely Planet I exclaimed “I didn’t know that Lima had an Inquisition Museum.” My companion, without missing a beat, said “No one expects the Spanish Inquisition”. The museum was great, exactly what I wanted it to be: a grotesque menagerie of wax models in shackles and things. I would have been heartbroken if the museum took itself seriously. 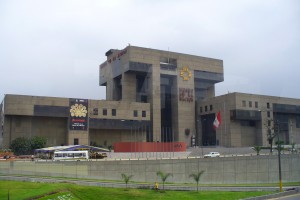 The second museum I visited was the Museo de la Nación which was amazing, yes, but exists as kind of a blur in my mind. See I had this bright idea that we were going to walk to the museum. Somewhere along the way a couple of teenagers who clearly were only looking at the color of my hair rather than the fact that I was wearing clothing from the Bolivian black market that was stained and full of holes, tried to mug me. That is the only time anything like that has happened in my entire life. One grabbed my male friend, the other started punching me in the face and pulling on my canvass bag. A bag that contained less than two American dollars, my battered and blonde-headed passport, and that Lonely Planet. My glasses flew off, I was dragged along the sidewalk, and I didn’t let go. My companion got free, socked the guy one and then the kids ran off (my friend’s Lebowski-esque comment “F**k’n amateurs”).

I was literally and mentally a mess at that point. Sadly, this led to a moment I still regret. I am mortified just thinking of it. This was all broad daylight and near me was a Peruvian guy who had been walking down the street. The moment I recovered my glasses I lobbed a massive, semi-incoherent Spanish assault on him for doing nothing. In the middle of my huge “Thanks for letting me get beat up in front of you”, I noticed that he had not been ignoring me. He was flagging down a police car…sigh. I was so rattled. I didn’t even apologize to him. Anyhow, we took a cab to the museum (I INSISTED on going at that point) and I did what I could to mop up my blood in the bathroom near the lobby. 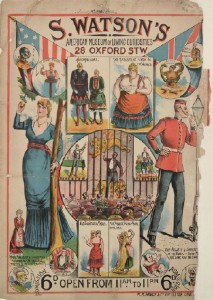 All of that was a build up to this: I just found out that Lima has a brain museum. That is right, at the El Museo de Cerebros Humanos en Perú (also known as the Cerebroteca!!), an interested visitor can marvel at around 3000 diseased and preserved brains. While other locations have more specimens than the Cerebroteca, those places aren’t open to the general gawking public. In Lima, brains in jars are for everyone.

I wonder about these museums of the grotesque. Are they truly teaching tools or are they simply an odd day out for those in search of a cheap and gross thrill. I’ve been the the Hunterian Museum at the Royal College of Surgeons and, I can tell you, I was there for the gross thrill. I learned that one can put a human face in a jar and that is about it. There is something just off about a display of, well, freakish things. Have we really come very far?

But then again, I do think of museums as entertainment spaces more than learning spaces. Did I go to the Inquisition museum to learn? Well yes, a bit, but I really went there for the contorted wax dummies. People are entertained by brains in jars, that is just how it is. I’d consider going there should I find myself in Lima anytime soon.