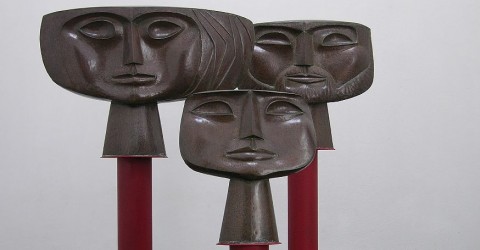 Today is another day for silent film lust and desperation.Arthur Posnansky, everyone’s favorite fantastic and fantastical Bolivian archaeologist, produced a silent film in 1926. Called La Gloria de la Raza, the pseudo-documentary was shot at Tiwanaku, starred Posnansky, and pushed his always-interesting views of the past. If you liked reading about how Posnansky believed the Tiwanaku the be the 12,000 year old nucleus of all American civilizations and culture, you’d LOVE to see it on the screen. Posnansky had cash and an eye for the mystical: I am sure La Gloria de la Raza was magical.

Yet, of course, it does not survive. I’m hot on the trail of either a script or a companion document to the film that Posnansky self published. It should show where he was going with the whole deal and, I hope, will note the locations of various scenes at the site. Film footage of the pre-restoration, 1920s Tiwanaku, however, would be both valuable and exciting. If only!

But, in the world of silent film, there are always discoveries to be made. It seems that what is lost can often magically found. I find that one of the most alluring aspects of silent film: the constant lost and found of it all. Rumors of Posnansky hauling a bag stuffed with his film reels to the US in the 1940s and returning to Bolivia without them are out there. Where did he go? A dark part of me thinks that perhaps I should take a look into it, that maybe it takes an archaeologist to find an archaeologist’s film. Would he have passed it off as a teaching tool to, say, W.C. Bennett at Yale maybe? Were they still in a fight then? I’m walking a dangerous road. Better searchers than I have failed. Do I want to be sucked in?

As it turns out, and I  didn’t know this until today, the only surviving Bolivian silent film has just been restored. Set my heart ablaze: it is a full costume, Conquest era romance! Ladies and gentlemen, meet Wara Wara:

Now, obviously, there is much to be excited about there. Pre-conquest utopia! Coca leaf divination! Maybe even pushing of mestizoization!

And heck upon heck, Carlos Mesa, former president of Bolivia, has come out swinging!

In an interview about the release of Wara Wara, the former president states that in the 20s racism was unilateral and now it goes both ways; that he is proud the country has an Indigenous president, but Morales is the president of the Aymara not the president of all Bolivians; that the new constitution is racist. Getting back to Wara Wara, Mesa says the film idealizes hybridity, and:

“mestizaje in Bolivia is now a banned expression, a negative element, looked at with contempt by the plurinational State. For me, however, the base of mestizaje is precisely the diversity of languages and cultures. I do not think there are 36 nations in Bolivia. It is a fiction, a conceptual error that divides us rather than unites us”

As you can imagine, I want to see Wara Wara so bad that it hurts. As far as I can tell, there is no way for me to buy it online and the Cinemateca Boliviana site is down (and has been down for a while).

On an almost completely different note, while searching for the film Wara Wara, I found a Peruvian singer from the 1960s who went by the name Wara Wara. I must say that I delight in this track nearly as much as I delight in the the trailer for the silent film. Enjoy: