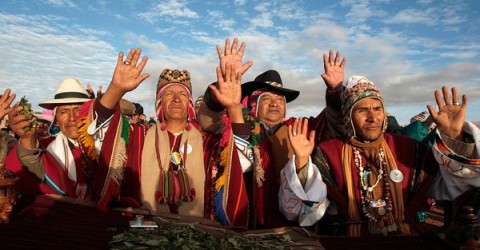 Today I heard a First Nations elder speak. This was particularly convenient as I spent most of yesterday discussing the concept of being indigenous with undergraduate students. The subject is so very complex that it was nice to invite them to come along to this and take in what he had to say.This is where I might lose you, oh dear reader:He spoke a lot about his own religion and his concept of Spirit, how Spirit comes from connection with the earth, etc. That this Spirit was quality of all human beings and that from it we know who we are, what we are, and where we should be. This and the rest of his talk brought my mind back to Bolivia in June 2005.

I suppose it is no surprise to say that my upbringing was decidedly western and passively non-religious which means that I am more than happy to accept any religion but claim none for myself. I feel powerful moments, just not spiritual moments. Except for once.

It was the solstice, the new year, and there were tens of thousands of people at the site. It was very cold, I hadn’t slept. First we ended up in the room with all the mallkus, fellas holding various levels of power within the indigenous communities. We entered the site with them which involved a lot of shoving and pushing and Bolivians becoming angry at us getting special treatment for some weird reason. In the semi darkness I walked past where I was going to be digging the next week (and where I dug the year before) and there were people scattered about. The main temple complex was bursting at the seams.

This was before I lost my archaeological ID card in one blurry birthday night. I teamed up with my boss who is Aymara (plus his archaeology cred was way high) and we convinced the military police that we were important enough to be let into the off limits part of the site. Then we waited. Various computer programs told us that there would be an astronomical alignment with one temple during the solstice sunrise and that is what we were there to see. The 20,000 odd people behind us did not know about this alignment. We didn’t know about it until just before. We waited.

Then the first sun of the new year peeked out over the distant ridge of the snowy topped Andes. The alignment was there. We were the first to experience it in that way in hundreds or a thousand years perhaps. Maybe more. I was struck by the idea that I was experiencing what this place was meant for. I was not just visiting, I was participating. We took off our gloves and, like the thousands of people behind us, warmed our hands with the new sun. My boss softly told what he believed this all meant to me and a young indigenous MP guy who had abandoned his post at the entrance to the alignment temple because we were clearly on to something interesting. We then climbed to the top of the pyramid (flashing our ID cards again) and looked out at the people filling the temple. It made so much sense.

Practically this had an effect on my archaeological work. It all made sense, everything I was finding, especially when illustrated with a modern photo of the packed temple spilling out onto my excavation area.

In a broader sense, and going back to this fellow’s talk, I’ve found that I mentally cannot stay away from Bolivia…nor away from from that site (and I have tried to). All other projects seem to fail. I come back to it. He would say, perhaps, that I am connected to that land. I would say, maybe, that I just feel like I understand it a little bit. Who knows.

Perhaps Spirit is just some level of pan human understanding that can be transmitted through time by place. This part of our nature that suddenly allows us to understand what others of our species were going for when they produced something. If so, warming my hands to the new sun, standing exactly where I should be, was my contact with Spirit.

I wonder if others out there who are on intimate terms with the past have felt the same way.

Categories: Imported, Post Tags: archaeology, Bolivia, ceremony, Indigenous, Native Americans
← “still laboring as their ancestors did, scraping salt off the ground”
What to do when the President’s grandpa robbed your grandpa’s grave and maybe made kissed his skull →