“still laboring as their ancestors did, scraping salt off the ground” 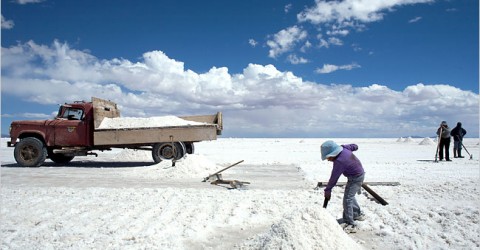 Very recently the New York Times published an article entitled “In Bolivia, Untapped Bounty Meets Nationalism.” My heart beats for yet another marketable natural resource that Bolivia has the most in the world of, but like the rest of them I wonder where it is going. I know nothing about lithium extraction and less than nothing about any extraction infrastructure that may already exist.I fear it may not exist and thus would be difficult/impossible to get off the ground. Nationalizing an industry that doesn’t exist yet…the article makes it sound like they are going at it. Go!Go team!

What really gets my typing fingers in a jitter is the wording of the article. First, the word Indian is used throughout. Come on Simon Romero…no one who isn’t from India is an Indian anymore, get with the program dude. You are publishing in the US where Indian is quaintly antiquated at best. You call someone an Indio in Bolivia they might knock your teeth out. What dude at the Latin America desk with the surname Romero doesn’t know that? Ultimately in many circles, Indian/Indio is a racial slur.It is loaded down with 500 years of oppression and people don’t like it. I’m not wiggling my finger at nothing.

I also wiggle at:

This desolate corner of the Andes, where Quechua-speaking Indians subsist on the remains of an ancient inland sea by bartering the salt they carry out on llama caravans.

I know he is trying to be dramatic here and maybe explain why someone would support indigenous resource control but, gosh. Why not just write ‘the savages scrape at the dirt.’ Actually he kind of says that later on, see title. Sure this is less obvious than Indian but sensationalization is really dehumanizing. Othering. Those Quechua speakers just totally got Othered.

What do you say to that, random Indigenous dude that got interviewed?

We are poor, but we are not stupid peasants.

Mr. Castro said. “But in order to go down that road, we must raise the revolutionary consciousness of our people…

That is Mr. MARCELO Castro, not Fidel or Raul. He is the manager of the project and this was said “Over a meal of llama stew and a Pepsi.” The llama eating was clearly a very important detail. Basically some dude said one thing that was sorta red, his name is Castro, and wham bam it is in the American paper because, you know, they seem a bit commie down there and we are not sure what to think about them. Par for any article on Bolivia.