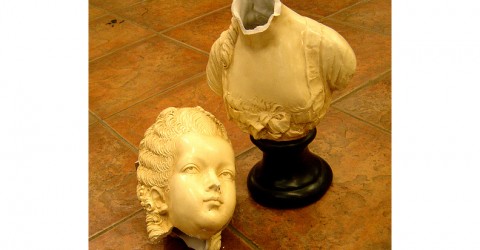 I’ve always found ‘dressing up’ to be a remarkably complex activity. It is also weirdly divisive: love or hate, you are a dresser-upper or you are not. I don’t really want to delve too far into the psychology of the masque, however, because I am afraid I will get lost, but I would like to muse a bit on the corpus of symbol triggers that signal a specific costume. How we know who/what costumed friends are without asking.

For the past two weeks my daily life has been centered around costumes. I am helping out at a costume shop just until the big H or until I drop from shock and exhaustion. Whichever comes first. One thing people have been asking me, to paraphrase, is “what is the salient aspect of x theme costume”. In other words: what is the minimum collection of clear symbols that I need to buy to be a 1940’s pin up girl (high heeled shoes, correct wig). There is always one step that can be taken to mitigate ambiguity; there is always a fake beard and a white Russian vs a towel that separates a bath-robed Dude from The Big Lebowski from Arthur Dent. 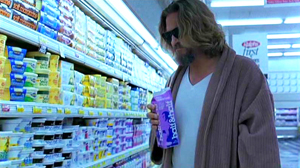 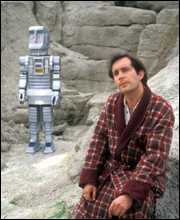 I am asked to reduce costumes to their least common denominator several times an hour and I am surprised that there is almost always a clear answer. This is particularly the case with the ever popular line of “sexy” costumes. All of these costumes are, essentially, a scrap of cheap fabric that barely covers anything at all with the previously mentioned salient symbols stuck to it. Sexy little red riding hood has a cape and basket; Sexy Sherlock Holmes has a magnifying glass, pipe and hat; Sexy Freddy Krueger has that glove and hat.

What actually surprises me most are the costumes that I wouldn’t have thought crossed the threshold into clear and instant identification; the costumes that just don’t seem to have all the symbols there. Case in point, the sexy Marie Antoinette line. 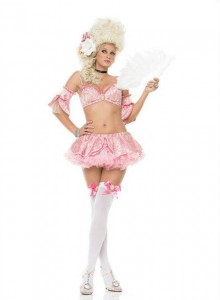 Sure, ol’ Marie was a trend setter in her day but I, rather faithlessly, do not fully believe that the public at large really knows who she was. Case in point, over breakfast my brilliant fella indicated that he thought she was some sort of courtesan and not the wife of Louis XVI which prompted my to waggle my wikipedia enabled iphone in his face. In a way, because of that, I just don’t think someone in a sexy version of late 18th century clothing is obviously supposed to be Marie Antoinette.
Full disclosure: it seems like none of our customers have this problem. They see these as obviously Marie Antoinette and MANY people ask for “Marie Antoinette” specifically and they see it in these costumes. Now what would push it over the edge for me, so to speak? What would make any of those costumes obviously Marie Antoinette? A red line around the neck and a little fake blood. The general weirdness of the sexy aspects of the costume aside, big white wig and decapitation = Marie Antoinette.

Because I am a horrible Classics nerd, this all reminds me of Greek pottery iconography. In black and red figure ceramics, it only takes the inclusion of one small scene element to make anonymous characters into household names. This pot is CLEARLY ‘Oracle of Delphi’ because the column means they are in a temple and the lady is looking into a dish. But “Woman and a Bull”…is it Europa or is it Pasiphaë? Well clearly Pasiphaë would be INSIDE a cow costume (hard to draw) but to be clear, best just depict Europa with the bull and Pasiphaë looking angry with her smug Minotaur baby. 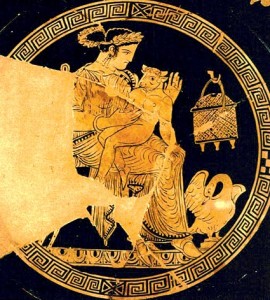 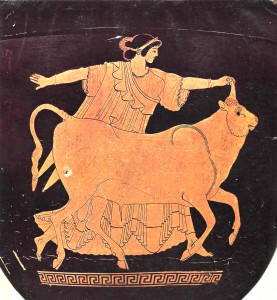 Suffice to say a fun Saturday afternoon for me is walking through halls of Greek pottery and playing “guess the story” from the symbols alone. Tags are for the weak. It is more fun to solve the iconographic mystery alone (then check yourself later). I can’t help thinking about how long it takes me to add up the symbols on each pot and formulate my speculation. For anyone in the ancient Greek world it would be instantly obvious that this or that pot either commemorated the Athenian games vs the Olympics and so on. Just as the differences between sexy Dorothy (checkered blue dress, ruby slippers) and sexy Alice in Wonderland (solid blue dress, playing card iconography) are obvious to us.