Libya: as the front advances 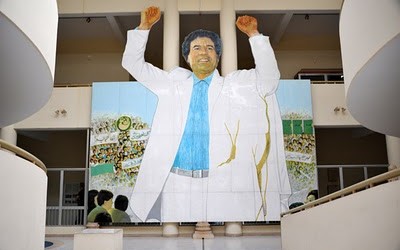 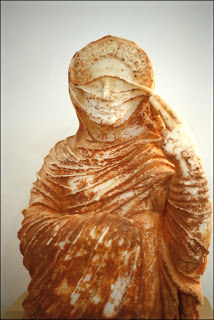 Perhaps this is a symptom of my distorted mental map of the Greek world, but until earlier this week I did not know that Cyrene was in Libya. Indeed, as I comb my drowsy (but now coffee-fed) brain, I can come up with nothing that I know for sure about Cyrene except, oddly, how to pronounce its name correctly in Greek (Ky-ree-nee). Where on earth could that be coming from?

Following the, frankly, surprising insta-looting in Egypt I expected to hear more about such things happening in Libya. Perhaps the dust is yet to settle and we will see instances of looting once the full situation in the country can be assessed, or perhaps the swift ascent of the eastern Interim Governing Council has prevented the sort of power vacuum that leads to looting. Totally possible. If that is the case, what about the west?

UNESCO has recently released a statement reminding everyone about about Article 4 of the Hague Convention. They request that everyone kindly refrain from bombing heritage sites in general, and World Heritage Sites in particular. Looking at the five Libyan World Heritage Sites, only Cyrene is off to the east near Benghazi. Two other sites seem to be away from the heat: the protected rock art is in the Acacus mountains to the Southwest which appears to be pretty much the middle of nowhere;  Ghadames is near enough to the Tunisia and Algeria borders that I am guessing everyone will leave it alone. Plus neither of those are Classical sites meaning related artifacts aren’t as quickly and obviously marketable. That just leaves Leptis Magna and Sabratha: two classical sites in the greater Tripoli area. Indeed, Leptis Magna and Sabratha are the other two “polis” of “Tripoli”.

Thinking about the potential for damage due to actual conflict: bombing, military action, etc, Sabratha and Leptis are probably not in the best of locations. Sabratha is located in the Az-Zawiyah district, and the area surrounding it has seen fighting. To quote wikipedia “sword-wielding townspeople fighting against soldiers with guns”. According to images released by the UK MoD’s Major Jeneral John Lorimer, once Gaddafi’s troops regained control of the area, the “Martyr’s Square Mosque”, at the very least, was “was razed to the ground”.

Clearly the destruction of the mosque was payback for protesting, but should the area come under siege again, especially from allied bombing, who is to stop Gaddafi et al. from storing vehicles, ammunition and other targets at the site to prevent them from being destroyed from the air?

I can only hope that the site is inconveniently located. Google maps makes me think that Sabratha is quite a ways off from Az-Zawiyah proper.

The famous site of Leptis Magna seems to be very unfortunately located in Al-Khums, on the road between Tripoli and the Zlitan and Misratah area. By all accounts, the situation in Zlitan and Misratah is grave, but supposedly Al-Khums is under rebel control. Maybe. At the very least, a shipyard in Al-Khums has been hit by allied bombing. Google maps shows what appears to be a large shipyard quite far from Leptis Magna but also shows Leptis as being pretty much right on the main road coming into Al-Khums. Should the rebels advance past Sirte and then through Misratah and Zlitan, pushing Gaddafi forces backwards, the road on to Tripoli is through Leptis Magna. Little stops either side from using the site as a strategic area and especially for the pro-Gaddafi forces, a choke point on the road that the planes in the sky would not bomb. 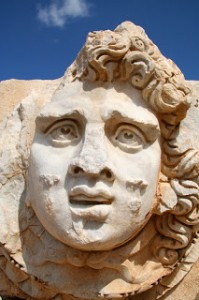 Turning to the question of looting. What stops someone from sauntering down to Leptis Magna and pulling some bas reliefs off a monumental arch or two? What stops night digging around the site periphery? Maybe nothing. The most I can find is a random report from March 4th describing the security situation at Leptis as “good” as the last foreign archaeologist was evacuated from the country. At this point, I am willing to believe that a March 4th observation means nothing.

Of course, maybe no one in Libya has the urge to loot sites. Perhaps there is a sense of site loyalty and the people around Leptis all like having it there and in one piece. Maybe everyone is honestly too scared to leave their house and poke around the edges of the site, especially after allied bombing of the port area. Fair. Who knows. I want to say that it depends on who is in control of the area, Gaddafi or the rebels, but I don’t even know if that is true

Yet, if fighting passes Leptis, I wouldn’t put it past either side to engage in opportunistic looting. If the area IS in rebel control, I am willing to bet that at least the giant smug portrait of Gaddafi in the Leptis Magna museum is probably now a casualty of war.