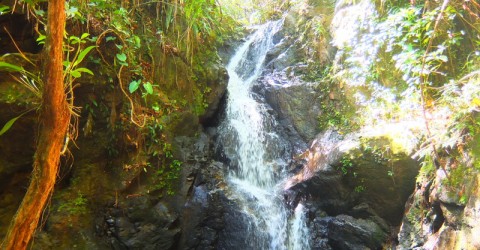 Night falls fast in the tropics: obviously. I’m typing by the light of my screen at mile 29 of the Hummingbird Highway. Debating if I should put a light on. Debate continues. My legs hurt. My upper legs in the front mostly. My temple stair legs. It is a feeling I haven’t had in a while.

I decided to leave San Ignacio. I decided that and then couldn’t quite decide where to go. This morning I was quite groggy, perhaps from the sleep aids I took, and found myself drifting in the morning heat. Almost falling back asleep. I tried to drift into a plan. It nearly worked. Or it did work. It worked.

Guatemala had been on the cards in my head but I wouldn’t have any travel insurance there. Sure that usually wouldn’t stop me but it was a convenient way to rule it out. I could go straight up to the Orange Walk area, where I think I would like to be on Monday, but beh. The laziness, the drowsiness, I wanted to laze and drowse for a day…a day at least. I kept thinking of the rock pools from yesterday, thinking how I didn’t want to leave there, that I wanted to just lay around for hours. I decided, then, I should find some creek to laze in. Thinking harder about it, I realized that I really did want to come back to the Hummingbird Highway area.

It really is the prettiest part of Belize. Lush, river-fed jungle encased (and rolling over) and oddly shaped cartsic mountain landscape. Fruit trees everywhere. Hummingbirds. I think it is still top of the pack it in list.

I interviewed an archaeology person at Cahal Pech. Just leaving the hostel I ran into the person who works at the tour company I went with yesterday; I think he was John’s cousin. He greeted me and said that Cahal Pech was too far to walk. I said it was only a mile, he said “But there are two hills…good exercise”. The hills were not the problem, the problem was the heat. Full sun. Farmer’s tan.

I took the bus to Belmopan without trouble. There I switched to the Dangriga bus. There were some Europeans waiting and they asked why I was standing in line if the bus wasn’t coming for another 15/20 minutes or so. Asked me because I was the only other white person who wasn’t Mennonite which made me feel a bit sour.  I didn’t explain well and just said that the bus runs on approximate times, that it will leave after it gets there. I didn’t say that there are often limited seats and I and everyone around me were prepared to push through the station’s wire door to get on the thing. Deep down I knew they didn’t know that but I let it slide. I was kind of hating on the woman’s “I am traveling in Latin America” clothes that she would never wear in real life and that people in Belize would never wear. Plus the total racial choice to talk to me, a person with a large pack who is the least likely person in the station to know what is up with the bus. In English. In an English speaking country.

Traveling rule of thumb, do what everyone else is doing. I got on the bus. They didn’t.

It was a bit of a stressful ride because I wasn’t sure where I was going. I had found a place online that allowed camping for 10USD and I thought that sounded as good as any place. On the Hummingbird. Rock pools. Sold. But I just knew it was at Mile 29, not where Mile 29 was. I couldn’t remember the mile for Yam Witz, where I stayed before. Was this place before or after? After. I saw it go by and only had a little walk from where the bus dropped me. Down the road, up a drive lined with fruit trees, to the owner or caretaker, I can’t quite tell. Owner perhaps. And his adorable little boy who was somehow being James Bond with sunglasses. He gave me two nights for 15USD (I probably should have just paid the 20USD I expected) and said I could set up my tent anywhere. He showed me the rock pool.

I went swimming as soon as I could (although I was waiting for a call from National Geographic that I took later). I decided to be someone who didn’t mind water vegetation and didn’t mind little fish. For a while I perched myself against a rocky submerged bank and looked up at the sky thinking not very deep thoughts about what the Maya would have thought of clouds. I scrambled up on a rock to feel the heat of it on my back and continued with the cloud watching and Maya thinking. “Did an ancient Maya person lie on this very rock?” What a dumb thought, you! It was an afternoon for super lazy dumb thoughts.

At one point the wind blew very very hard, a big gust, and a shower of yellow leaves fluttered down into the pool. It was lovely. I will likely make a day of that tomorrow.