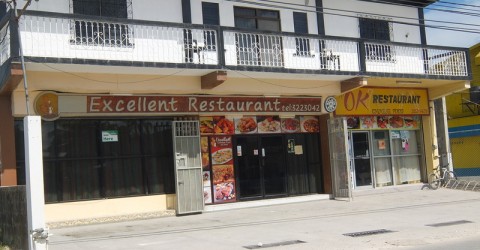 I woke up this morning in paradise with a headache, feeling out of sorts. Up at 6 in the tent and managed the 7am bus from Dangriga to Belize City with a short stop at Belmopan. I called down to a little girl in a house to ask if I was at the place the bus stops. She looked terrified and indicated yes. The bus came moments later.

The plan was to head to Orange Walk and get from there to Blue Creek on Monday, but as the day began to pass I was feeling worse and worse. I find myself wishing I was home, wishing I didn’t have over a week left. Dark.

It was a calm ride all the way to Belize City. I bought tamales in Belmopan that I could only partially eat. I snarfed the rest in the Belize City terminal. The Orange Walk bus was crowded and the whole time I had my pack on my legs which hurt, and I was drifting in and out, feeling ill. I found a clean but slightly depressing place to stay in Orange Walk and set about to feeling sorry for myself.

There isn’t much to say about Orange Walk Town. Here it is. Right here. On the river. I did see two of Belize’s stoplights (there may only be two), and they seemed to be regulating a bit of traffic! Belize, I should say, is a land without McDonald’s, a land without Starbucks. When that horrible article was going around claiming Bolivia had banished McDonald’s for health reasons (there are Burger Kings, Subways, and local fast fried food chains EVERYWHERE), I wondered if Belize had gone down that road. Nope.

I realize there are two things I must have here that I don’t have now: 1) vehicle; 2) permanent living space. 3) would be a field companion but that is a tall order. Anyone reading want to volunteer? There is at least a masters degree in helping me out for a few months. I can see a whole PhD here in criminology or sociology on antiquities trafficking stuff. Any takers?

The work isn’t going bad. Everyone is receptive and I have good ideas. Feels successful with lots of possibility. That wasn’t the issue.

I didn’t change my tickets, although I got close, and am now happy to find myself headed to Blue Creek for two nights. I’m just lonely and sickly, but better with loads of water, some ibuprofen, and the aforementioned Salvadorian doritos. I’ll sleep well, with relief.