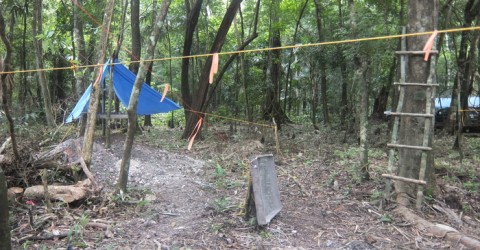 Absolutely all of the concern is gone. I almost can’t believe that I nearly left. It seems so silly now. Truly silly.

This morning I woke up early and kicked around the internet a bit. I had been told that there was a bus to San Filepe would leave from the Orange Walk market square at some time, but the time was unclear. I had been told either 11 or 11:30 so I started out a bit after 10. As I passed the Orange Walk Department of Transportation I ducked my head in to ask the bus departure time. The fellow at the desk looked confused, then said he thought one left at 10, but that they leave every hour. Since it seemed I had plenty of time, I went to a sweet bread shop and bought some lunch to bring with me and lugged my bag over to the market area.

At the market it became clear that a) the bus to San Felipe had left at 10 and b) there would not be another one until either 3 or 3:30. I sat around until 11 just to make sure that this info was correct (one person said 4; another person said, oh it will come soon). When 11 rolled around, I walked down the line of buses and felt myself squinting at a bus to August Pine Ridge. It was the right direction. Should I take it and hitch from there? As I was pondering it, a super nice guy who was associated with the bus asked me if I needed help. I told him the situation and he agreed that going to August Pine Ridge and trying to hitch a ride was likely my best bet. I wouldn’t have any trouble. I hilariously got on the wrong bus and he pulled me off again and set me right.

As the bus took off, he told me that I should get off at the August Pine Ridge gas station, that anyone heading to either San Filepe or Blue Creek (which I told him was my real destination) would go by there and that I would eventually get a ride. He said it was safe. At the gas station I stuck my thumb out. All of the fellows doing road construction right there were kind and helpful. There were no real takers though.

Eventually a fellow that everyone knew pulled into the gas station to put water in his truck. All the gas station people said “he is going to San Felipe”, but I couldn’t quite get an answer out of him, if he would take me. He did end up taking me and, as luck would have it, was bringing a woman all the way to La Union, right at Blue Creek. I put on my best ‘chatty’ personality. Laughing at what he said, listening to his stories. He said his son works with the archaeologists at Blue Creek.

At the La Union road next to what is at least called the Blue Creek Police Station, I called the archaeological project and they came and got me. They gave me a cabin to sleep in and were just honestly warm and inviting folks. They said their original plan for the evening lecture hadn’t materialized and asked if I would do it. It was, honestly, the least I could do.

Mark Wolf, who I hadn’t seen since Holmul days, is here. I don’t know anyone else but a couple of people I know from the internets.

Strange computer problems kept my lecture from having slides but, as it seems, it went really well. There were a ton of great questions after and much enthusiasm. I try to give the sorts of lectures that I like to hear: filled with open ended questions to ponder and professions of my own hypocrisy.

They gave me a lot to think about. The Maya Research Program is spectacular. Hooray!