Everest: Good for the Sherpa? Good for my PhD? 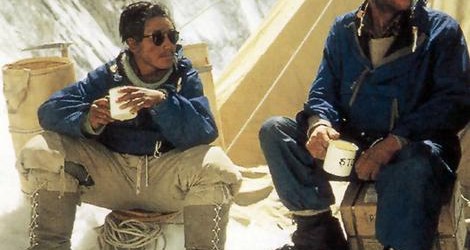 It seems I am party to swirling momentary obsessions that cripple any attempt to do anything else. The internet is my enabler: I sit all day following the tendrils of information, staying up to all hours and ignoring the very pressing other things that I should be doing. Who knows how they start but after the obsession has passed I have trouble even remembering it happened.

Yesterday’s obsession seems to be spilling into today…the idea of climbing Mt. Everest. I’ve read account after account, watched a few documentaries, signed up for an Everest news feed which I will probably not be interested in later, and so on. Golly I even have learned mountaineering slang. All of this is useless. I’m not going up that mountain or any mountain for that matter…the act seems so silly to me. Silly acts are obsession fuel.

So the highest I have ever been is 3845m above sea level. You could tack on another couple of meters because at that altitude I both climbed a water tower and climbed a pyramid. That altitude hurt and I did very poorly in it, at least the first time around. I got a special kind of sick after a few months that warranted a trip to the hospital. This Everest obsession has taught me that I was only one cough symptom away from high altitude pulmonary edema…no wonder I got such quick hospital care. However the ol’ lungs were clear (I still have the x-ray to prove it) and yours truly went back to work. For the record, Everest base camp is above 5000m and the summit is above 8000. 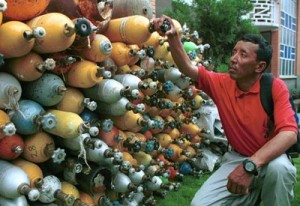 Twice in Bolivia I have had the option to go higher, both times for interestingly sacred cultural things that I would have liked to see and/or participate in under any other circumstance. You better believe that there was no way I went any higher than I had to, and that was in the face of actually going up to do something (collect herbs, rituals, etc). Everest just seems like an absurd notch in the belt. An insane risk for absolutely no tangible gain. I suppose it is this strange intangible significance we culturally assign the feat that causes people to keep putting their life at risk.

One theme that seems to keep rearing its ugly head in everything that I have been reading and viewing re: our western cultural obsession with Everest is the semi-animalization of the Sherpa people. Sherpas are constantly referred to as being possessed: “I sent my Sherpa ahead,” “Our Sherpas went back up to help” and so on in contemporary Everest accounts. The Sherpas hired by the various groups seem to be the people who are forced into difficult situations, attempt daring and life threatening rescues of inexperienced climbers who shouldn’t be on the mountain at all (and I would hold no one should) and many probably do so for not very much money. One fellow who died very controversially up there in ’06 apparently paid less than $8000 for his entire Everest adventure. What do you think was the Sherpa dude’s cut?

An editorial by Tashi Tenzing published in the New York times in 2003 estimates that a Sherpa can ear about $2000 during the two month climbing season. Good if you look at it from a poverty standpoint, terrible if you recall that something like 1 in 12 people who try to get up Everest dies. Tenzing goes on to say:

Sherpas join expeditions without life insurance, which is expensive and difficult to get, knowing that if they do not return there will be little for those left behind beyond the good will of their community… I asked my friend Ang Dorje how much longer he would climb on Everest with big expeditions… “Four more times,” the amount it would require to build his home and educate his children.

Here is hoping that the Sherpa people make bank on food at the bottom. Somehow that a Sherpa can scale the peek multiple times seems normal. That some white dude from Cambridge can do it seems like a laudable feat. Again with the animal mentality: many of the writers seem to think that going up the mountain is what the Sherpa are FOR. Little is done to push back against this tendency. As Tenzing says “The foreign climbers go home with photographs of themselves on the summit, then leave their litter behind and forget the Sherpas who have contributed so much to their successes.”

Finally, the last aspect of the Everest thing that has fueled my current obsession has been the idea of large amounts of human refuse scattered up the mountain. I read some heritage paper years back about this and mostly pictured tent bits an oxygen canisters. While this is not incorrect, the way is also apparently littered with 200+ human bodies. Well to be more accurate, there are 200+ bodies somewhere on the mountain but apparently any given adventurer gets to ‘enjoy’ several of these on the way up and for the most part everyone just keeps on movin’. I did a google image search and all I can say is “REALLY”? How do you not turn back the moment that you see something like that. Where is self preservation in all this? 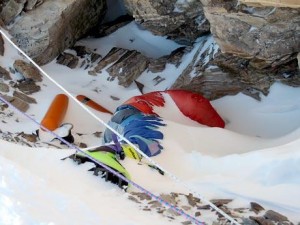 What struck me most about the body thing is that several of the bodies up there have been given colloquial names by other climbers. Green Boots for example is actually a fella by the name of Tsewang Paljor who died in ’96 and whose body is under an overhang near the top. People see him, they call him Green Boots. Very odd. There is apparently now another body in Paljor’s overhang, the same ’06 controversial death of a fella who went up the mountain on the cheap. George Mallory was located a few years back by a team looking for him. How far do you think we are from Everest frozen human body tourism? Is this heritage to preserve?

Yes. That is a photo of Green Boots. I promise the grotesque and I deliver.