Blessings of the “dark” Virgin of the lake OR Copacabana, where the cars wear lil’ hats. 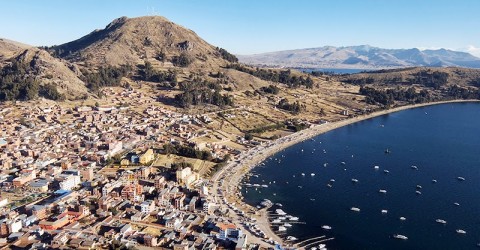 I’ve spent the past two months in Bolivia and this weekend I was in Copacabana, a beautiful and ancient town on the edge of Lake Titicaca. All Copacabanas that you have heard of are its namesakes. I’m going to skip over the Inka ruins and the strange and pervasive crowned frog sculptures that I don’t quite understand and focus on Virgins, earth goddesses, and cars with hats.

The Virgin of Copacabana 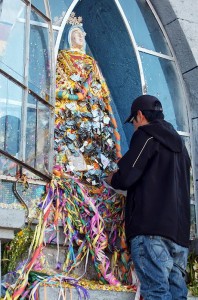 Offerings to the Virgin on Calvary Hill

The Virgin of Copacabana is Bolivia’s patron saint and it is no mistake that she is found at one of the most holy spots for the Inka (and, perhaps, pre-Inka). Copacabana is, roughly, where the Sun was born and thus was the spiritual base of power for the Inka nobility, the sons of the Sun.

As the story goes in the mid-1500s, there was a storm on Lake Titicaca and fishermen who prayed to the Virgin were saved. They built a shrine to her and an Inka fella (said to be a direct descendant of Inka nobility) named Tito Yupanqui sculpted an image of the Virgin out of clay.

Apparently the local Spanish priest thought the sculpture looked terrible and had it removed. Tito, not letting this setback get to him, moved to Potosí, learned to sculpt for real, and made a new Virgin of Copacabana that conformed to whatever it was that the Spanish priesthood wanted to see in a devotional object. The image is a miracle worker and a basilica sort of grew up around it. It never leaves the church.

I would be remiss if I didn’t mention that in April 2013 the Virgin of Copacabana was brazenly robbed of her gold and silver adornments. This is why I was in Copacabana in the first place. 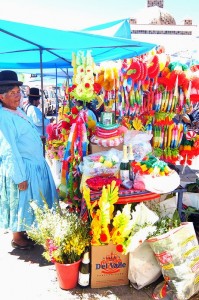 Because the Virgin of Copacabana is so very holy to Bolivians and Peruvians, vehicles are brought to the church to be blessed by the Virgin (read: a priest with a bucket). The is an elaborate affair and the vehicles are decorated with flowers, garlands, bright coloured paper streamers…and hats. Shiny hats. More on the hats in a moments.

From my observation, important elements of this vehicle blessing are a) the setting off of firecrackers and b) the spraying of the car with beer and confetti. These are really rather important as they link the process with the idea of a cha’lla, a ritual blessing. 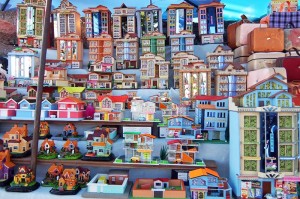 A cha’lla is, directly or indirectly, a ceremony that involves the earth goddess Pachamama. It is, apparently, a ceremony common in August as the earth needs renewing during the Southern Hemisphere winter. The cha’lla elements I saw at Copacabana included pouring alcohol on the ground (Pachamama is a thirsty goddess); the placement of models of wants (cars, homes, animals) in holy places; the burning of aromatic herbs in braziers; and a whole lot of coca leaf divination. Many people were eating aptapis, a sort of picnic of potato varieties wrapped up in a blanket then spread out for everyone to dig in. Personally, I’ve only ever participated in aptapis after ceremonies that were openly Pacamama oriented. 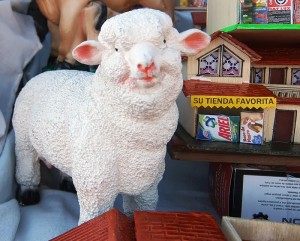 Heck *I* want this sheep

And this is the beauty and contradiction of Bolivia. The holiness of Copacabana extends backwards well beyond the Christian era and the cultural memory of pre-Conquest things exists in those elements of the ritual. The Virgin of Copacabana IS Pachamama, or at least takes her place, hard as it is to imagine the Virgin Mary sucking alcohol from the ground. The line of Aymara men in earflap hats, ready to tell the future with coca and bless pilgrims with grain alcohol, smoke, and ancient words as they ponder the stations of the cross on Copacabana’s Calvary Hill doesn’t challenge anyone’s Catholicism. It is exactly right for that place.

This melding of times, this layering of place, is perhaps the thing that I love most about Bolivia.

But what about the hats? The cars with hats!

Frankly, the cars with hats are just satisfying. If you know one thing about Bolivia it is probably coca. If you know TWO things about Bolivia, they are probably coca and hats. From the precariously perched bowler-style hats perched on top of a Paceña chola, to the earflap deal that became hipster-hot in the west in recent years, Bolivia knows where it is at hat-wise. It makes sense: the country is both chilly and closer to the sun than most places. It is also rarely cloudy, just cold and bright. Ancient Andean art is totally hat-full. Hats are a necessity here and always have been. 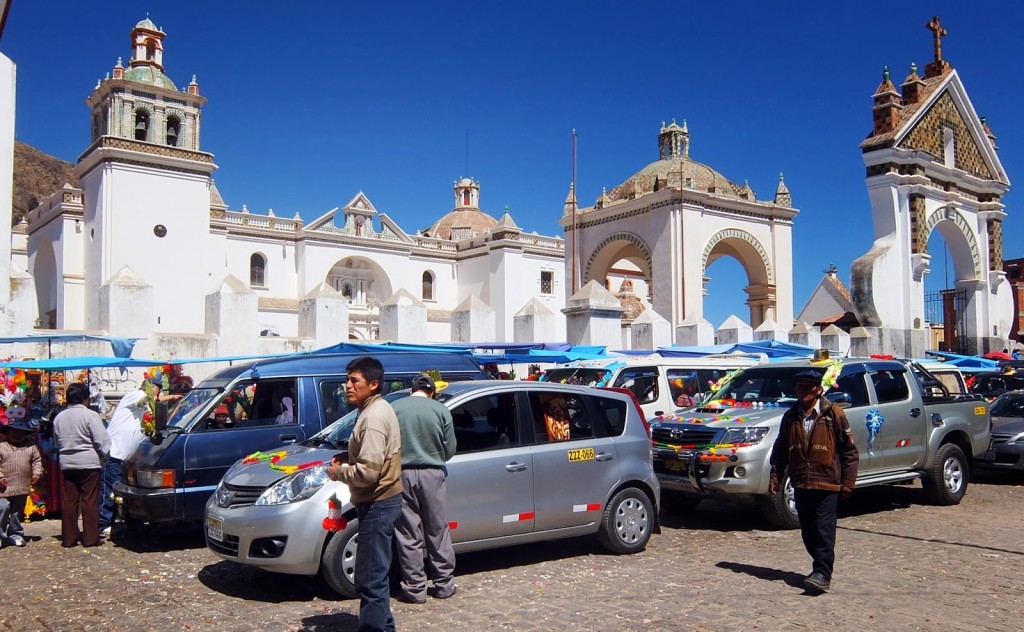 Cars waiting to be blessed outside the Basilica

So, when the vehicles are being blessed they wear hats. By “they” I mean the men, the women, the children (babies often have lil ear flap hats with animal ears on the top: adorable) and the vehicles. The car hats are shiny party hats with BENEDICTION DE COPACABANA printed on them. Usually they are at the centre of the windshield but some are placed jauntily to one side. Why not? 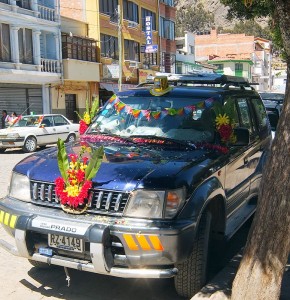 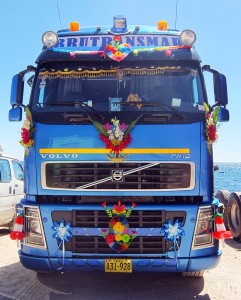 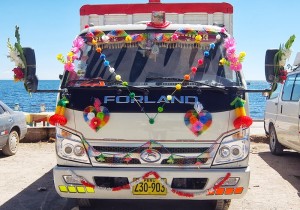 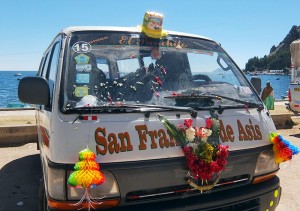