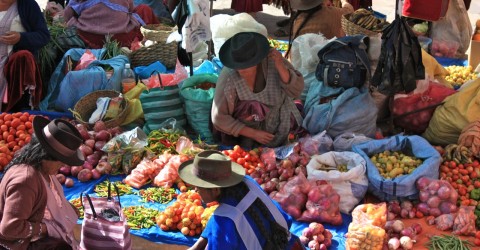 I love Bolivia. This country is the most intricate, fascinating, and surprising place. I am delighted to be back in La Paz for the next five weeks.

My broader plans are unclear beyond “writing”. However, I am taking this opportunity to sample or re-sample the glorious ancient fruits of South America. Beyond the appeal of exotic taste, I adore food depicted in pre-Conquest pottery. Thus I present to you the first batch of ancient Andean fruit, reviewed. 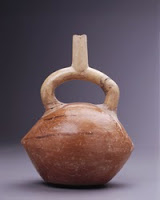 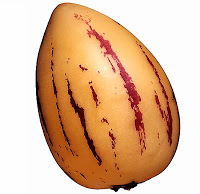 Pepino dulces are pretty fruits. Their colours are pleasing and they feel tender in  my hands. They have a mild flavour with a strong hint of melon. Unfortunately I dislike most melons, but the pepino dulce has just enough cucumber flavour to be pleasant enough for consumption. The pepino dulce looks prettier than it tastes but that is enough for me. 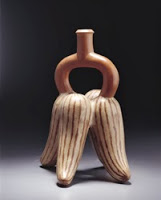 These crunchy vegetables have strange seeds. They look like little black houses with chimneys on top. Or monster teeth. They are often stuffed and cooked like chilies rellinos, but, as I lack an oven, I can only offer comment their raw state. The flavour is mild and vegetal and, as such, they have become a staple in my nightly salad. They are not unique in that sense but I will keep buying them. 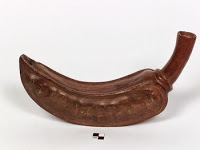 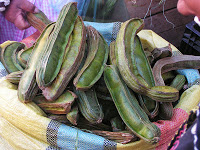 I am still coming to terms with the pacay. How could I question a legume known as the “ice cream bean”? The problem is that the pacay treads close to the bubble gum flavour of the dastardly cherimoya (see below). Wikipedia compares the edible white matrix to cotton candy. I say cotton candy with a vegetal tinge. A new Bolivian friend mentioned the pecay last night while we talked of local fruit. I was proud to say that I knew the pod. He confessed a longing for the fruit of the fish-n-chips tree, flora endemic to the United Kingdom. 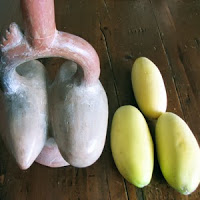 When I mentioned the tumbo last night to the previously mentioned native son he laughed. A Bolivian, he said, associates tumbo with singani cocktails. I have not yet availed myself to said drink but, from my experience with tumbo (and singani), the beverage will be charming. The gem-like, juice encrusted seeds of the tumbo resemble those of the passionfruit. The English name banana passionfruit is fitting in that respect. Tumbo are just my style: sour, tart, and versatile.  I will be putting those sparkling seeds on many a salad. 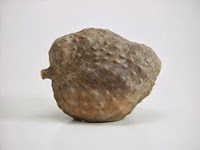 Incorrectly described by Mark Twain as “the most delicious fruit known to man”, the chirimoya is a terrible beast. The flavour is akin to a sickening and sweet version of ‘bubble gum’. I derive no pleasure from the fruit. In 2004 my friend convinced me to purchase chirimoya ice-cream at a supermarket in La Paz. He thought that the word “chirimoya” meant “happiness” in Spanish. Who could turn down happiness ice-cream? With one spoon-full all happiness disappeared. We tossed the whole tub.

The name comes from the Quechua word chirimuya, “cold seeds”. Although this refers to the ability for the seeds to germinate at altitude, they are mean little things and poisonous if crushed. If injected, the extract of the bark of the chirimoya tree will cause paralysis. Chirimoyas are jerks

Unlike its evil cousin, the chirimoya, the guanábana or soursop goes beyond tasty and into the realm of the divine. It is both tangy sour like a pineapple (although less sour) and creamy like a banana. Soursop juice is smooth and thick like a milkshake. Pulped and frozen, soursop resembles ice cream and requires no other ingredients. If I could have no other fruit for the rest of my life, soursop would be a contender.